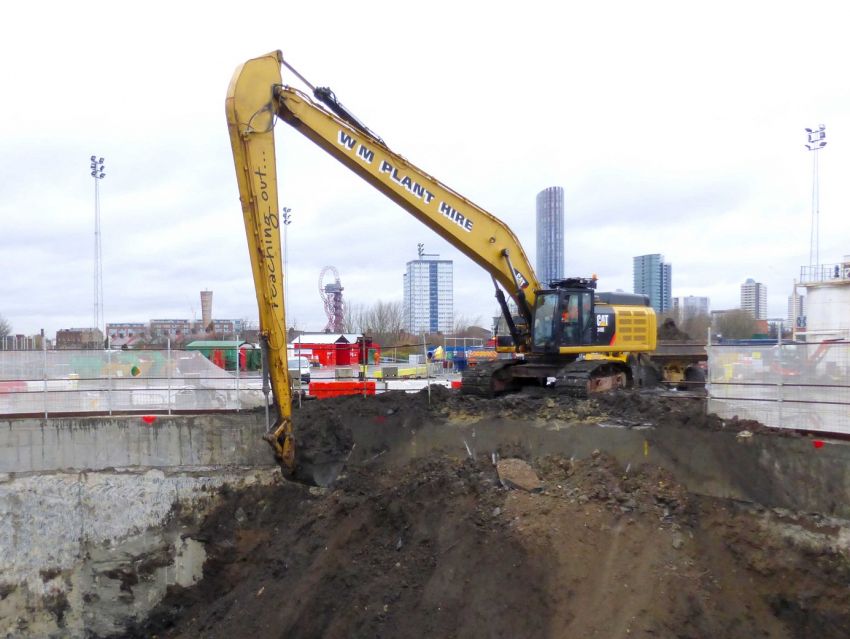 The Thames Tideway Project is the planned upgrade of London's sewerage system to cope with the demands of cthe city well into the 22nd Century.  At up to 80m below ground the Lee Tunnel is the deepest ever bored in London and forms a critical part of the Thames Tideway Tunnel in the cleaning and treatment of sewage storm water before it reaches Beckton Sewage Treatment Works.

The Lee Tunnel has been constructed using a tunnel boring machine (TBM) which, after almost two years underground broke through at Abbey Mills pumping station near the Olympic Park in Stratford.  In order to recover the TBM and prepare for the future tunnelling works, an access shaft had to be excavated.  WM Plant has been involved with project from an early stage and advised on production figures that could be achieved using a long reach excavator, well above that of a traditional crane and skip method.

Within the low emission zone and the project demands of reduced emissions, WM Plant Hire used their latest CAT 349E long reach excavator fitted with Tier 4 engine technology, the first of its type in the country.  This long reach machine was used to start excavation to remove the TBM, showing high levels of production of up to 300 tonnes per hour, completing the excavation of the first 20m at a great speed. so improving the programme by several weeks.  The production together with low emission engine satisfied both the stringent requirements for constructions in the capital and made an improvement on the construction programme.