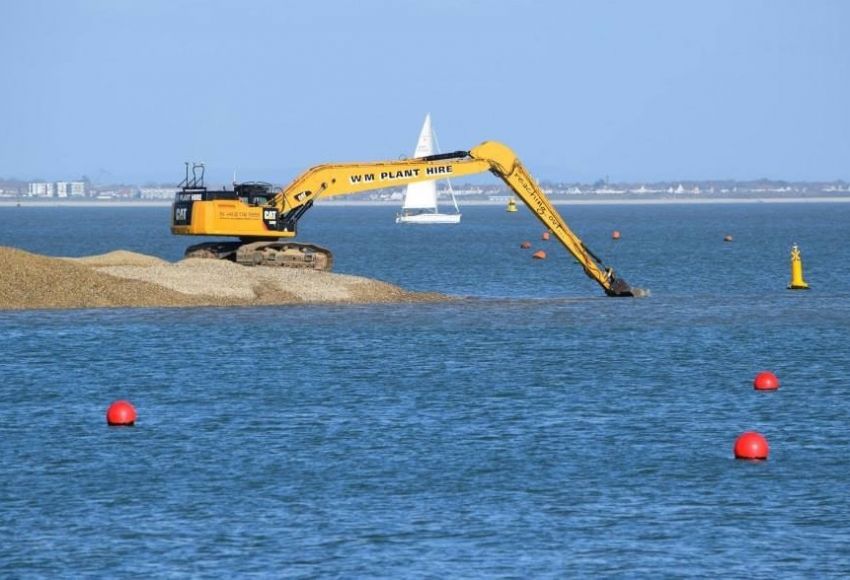 The construction of the new detached breakwater for Cowes, planned for many years, got underway in 2014.  The design consists of a 350 metre long, detached rock armoured breakwater that protects existing homes, businesses and harbour users and that enables the continued regeneration of East Cowes, resulting in further economic benefits for the island.

A long reach excavator was required to shape the new breakwater that would be constructed using material dredge and pumped from a cutter suction vessel.  When in its final location, the breakwater would require covering with a layer of rock armour.

The breakwater core was reshaped up to 4.6 metres above chart using a 60 tonne CAT349 excavator using a 3D dig system for the underwater profiling.  The works were phased to ensure that the initial fill would consolidate, be re-shaped to the design profile and then again following a winter settlement period.  Further reshaping works were done with a geotextile layer placed over the sand fill and gravel ballast placed on the breakwater sides to anchor it down.  The final phase was to place the rock material , delivered from a floating barge working around the tides.  Various attachments including reinforced rock shaping buckets were used on the long reach machine to place the rock, which weighed up to 3 tonnes.

It is the specialist nature of our long reach machines with experienced operators that led to the selection of the company and the overall success of the project.