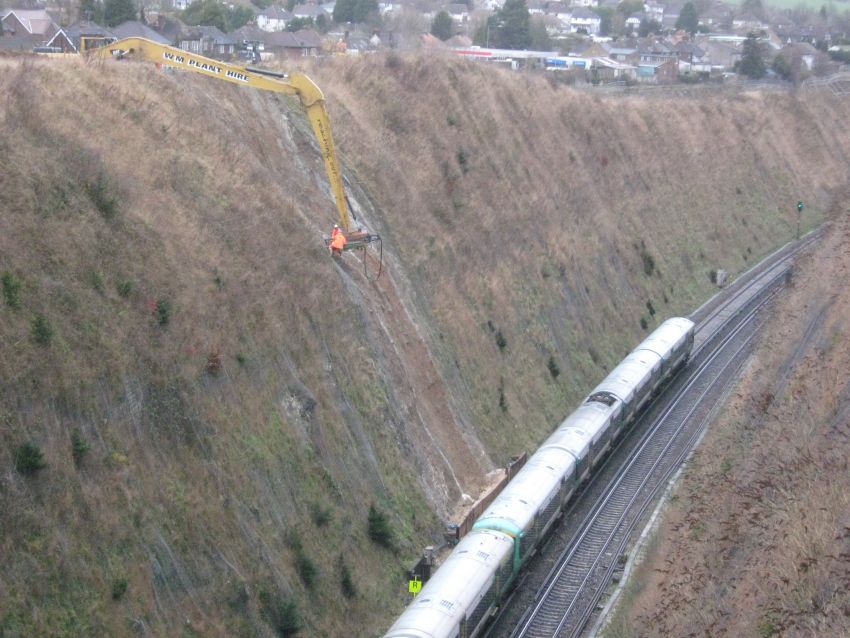 Each year sections of the gravel deposits slip, which has caused several train derailments in the past 12 years.   A slope stabilisation project was commissioned as a priority by Network Rail.

BAM Nuttall was appointed as main Contractor and formed a joint venture with BAM Ritchies to carry out the slope stabilisation works. In total some 6000 soil nails had to be installed to anchor the steep cutting slope in addition to some concrete anchor ground beams.  Access was the main challenge together with the need to keep the line open.

Having completed many soil nailing projects on highway and rail embankments, WM Plant Hire offered a selection of long reach machines that were able to access the site and traverse the 'spine' of the two cuttings with a weight restriction.  A total of three 18m long reach machines weighing 30 tonnes, and a 22m reach machine weighing 40 tonnes, were used and fitted with drill masts to install the nails.  Powered by the excavator hydraulics and working in conjunction with manual slope rigs the slope was successfully stabilised, with the project going on to win a series of awards for the innovative approach.