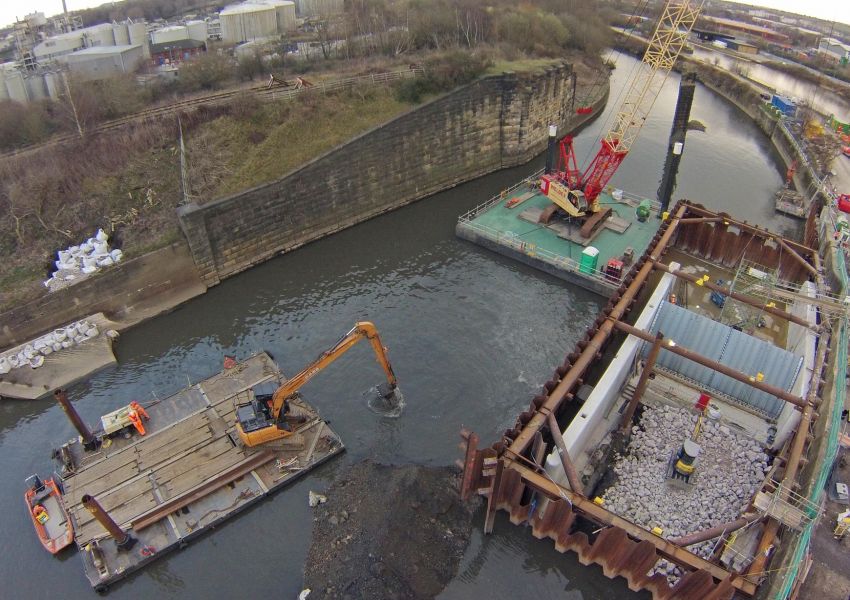 The £45million scheme is one of the largest river flood defence schemes in the country. This provision of flood protection for the
River Aire is designed to protect against a 1 in 200-year flood event, with construction work in the city centre and Holbeck, extending 4.3km. Over recent years several ‘near miss’ flooding events have occurred along the River Aire through the city centre of Leeds, West Yorkshire, but in 2015 Leeds was hit with a significant flood event. With no formal flood defences along the River Aire the delivery of this scheme became a real priority. The Leeds FAS includes a ground-breaking first for the UK with the installation of moveable weirs at Crown Point and at Knostrop, that can be lowered in flood conditions to reduce river levels and the threat of river flooding.

A variety of long reach machines were required over a 16-month period for multiple works on the scheme, including:

Our pontoon mounted CASE CX130, 13 tonne long reach proved the ideal machine for the early temporary works, given the considerable
access constraints. The main river dredging was also tackled initially from a pontoon, with our 30 tonne CASE CX250 18m long reach, fitted with GPS dig profiling equipment to ensure the accuracy of excavation. Later surveys showing more material washed down during the winter floods changed this approach, with our 20m CAT345 long reach selected to increase production. This machine worked from a larger pontoon to load hopper barges, moved by powerful river tugs to an existing wharf structure to be offloaded into dump trucks. Our CASE CX210 15.5m reach machines working from both the bank and pontoons were employed to complete the remaining dredging and rock placement at Crown Point and Knostrop. Flexibility and the range of machines in our fleet has proved a real asset and benefit to the execution of these elements of the scheme so far.