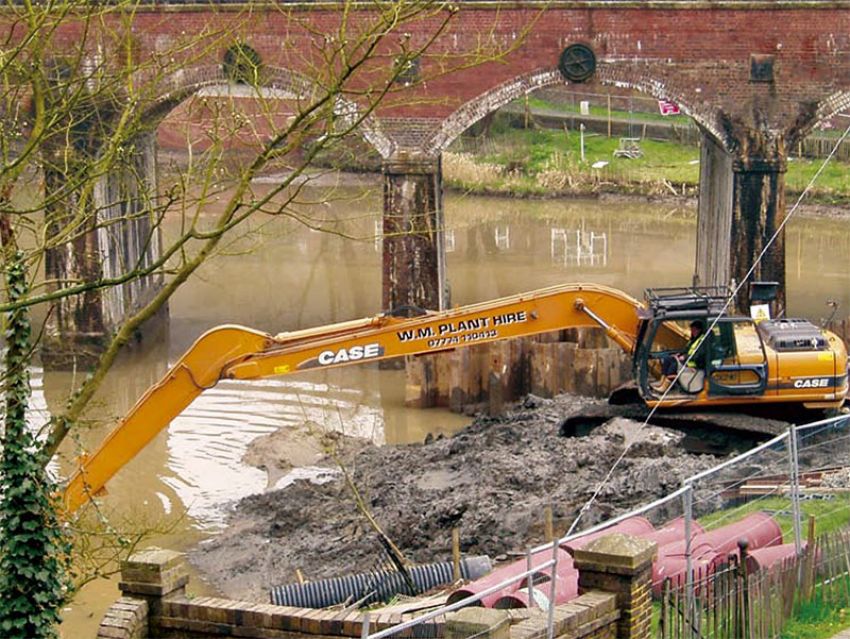 Coalbrookdale forms part of the Ironbridge World Heritage Site and Conservation Area. It is famous worldwide as the ‘Cradle of the Industrial Revolution’. In the early 1700s the natural watercourse was dammed to provide power to furnaces and forges. The works were abandoned in the early 1900s and many of the historic pools silted up. Archaeological studies assessed the extent of the watercourse system and funding was secured to develop the area as an important local and tourist amenity.

WM Plant Hire were contracted to dredge the pool area and remove an estimated 10,000 m3 of silt from site, working adjacent to a live railway viaduct and local authority vehicular access road.

An access roadway was constructed and the long reach excavators were used to minimise disturbance to the base of the pool, which at its widest point exceeded 35m. The 17m and 24m reach excavators were used to dredge the silt and load a series of lorries. Overpumping was used to drain the pool as much as possible to allow the silt to dry out. In the wetter areas ground mats were used and the material mixed with dry ash to improve the transportation. Close liaison with Network Rail ensured the integrity of the viaduct was not compromised.

WM Plant Hire’s specialist plant showed high productivity and reduced the need for double handling of the material. The highly skilled plant operators were able to mitigate safety risks and environmental impacts by working from a safe distance to the required depth.