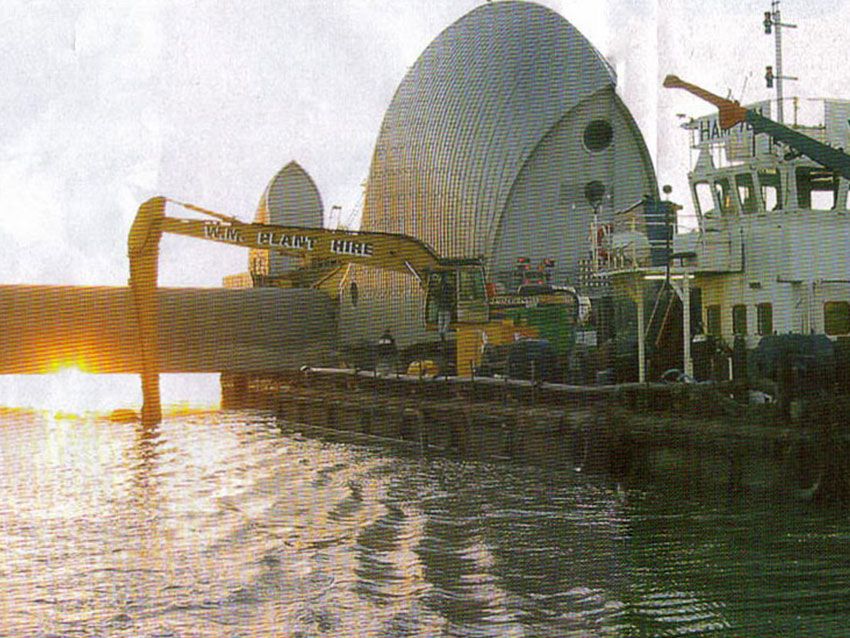 Not suprisingly most long reach excavators find their way onto demolition tasks, but one Shropshire hirer has developed a niche business providing long reach kit tailored for civil engineering projects.

Geoff Ashcroft spoke to WM Plant about its specialised fleet.

UNDERSTANDING the individuality of most muck shifting tasks and civil engineering projects has helped Brendan McGettrick to steer away from the cut-throat world of self-drive plant hire.

One of our regular customers asked for a long-reach excavator to work on a river project and because we didn't have anything suitable - nor did we want to lose the hire and the business of a regular customer - we set about providing a solution, says Mr McGettrick.

That solution came from a local engineering firm, which soon adapted a 1992 model Cat 320 excavator to Mr McGettrick's specification by giving it an additional 7 m of reach.

The customer was thrilled with what we provided and, as word got around, several new applications were found and demand increased, he says. "We soon had a second machine converted and never looked back."

He says the business naturally evolved into longreach excavators over a period of time and that encouraged the firm to dispense with regular selfdrive kit in favour of the specialist approach.

With slew restrictors installed, the fleet can be put to work on slope stabilisation and embankment management projects working in close proximity to railway lines. It is a productive alternative to using traditional, labour -intensive methods with safety harnesses and climbing gear.

Mr McGettrick says: It's all about the length of reach, because in most instances we can work from the top down. And it's not just with buckets - we offer compactor plates, breakers, grapples, de-silting pumps, tree cutters and mulchers for use on the end of the dippers."

Among the most popular applications for WM Plant Hire's long-reach excavators are slope stabilisation, coastal defence and flood protection, marine dredging, settlement lagoon excavation, deep trenching, and sand and ravel extraction - although the business has started moving towards contracting rather than hire.

It's no longer a ponds, embankments and riversbased hire operation, Mr McGettrick says. "We have many customers who know exactly what type and size of machine they want for a given task and there are many that look to us for a solution to their particular problem."

Customers are increasingly looking for more than just a machine as part of that process.

Mr McGettrick says: "We've been asked to dispose of some of the products of deep excavation or lagoon emptying. which takes us a step on from an hourly hire rate to a fixed price contract."

But he believes creating solutions for customers is a positive way forward for the business. It has led to some speculative risk-taking when it comes to machine purchases.

I took a calculated gamble on long-reach Cat 375B excavator. based on the potential it had to fill the requirement of one customer albeit on a small scale he says.get us closer to 30 m for those one-offs" he adds.

Fleet utilisation is running at about 75 per cent, which is considered high in such a specialised business. That utilisation comes from not having surplus equipment and by being careful with specification and fleet variation.

WM Plant Hire currently operates a dozen long-reach excavators. ranging from a 12 m Case 15 tonner up to the flagship 25.8 m Cat 375B.

And all kit goes out to site with a skilled operator. At WM Plant Hire it is very much one man to each piece of plant, and each gets to understand the feel, balance and capabilities of his long-reach machine.

Mr McGettrick says: "We like to think there's an excavator configuration in our fleet to meet most requirements. Gone are the days when we relied on a few ideas and a local engineering firm to carry out the conversions. These machines have become very specialised so we work closely with Cat and Case to provide the right specification for our customers, although machine availability from speccing up to delivery can be a period of up to nine months, so it needs to be right. But after all, it is customers' requirements that influence our fleet."

Mr McGettrick's machine choice is based on experience of strength and durabillty, particularly for dredging or coastal work where excavators are on pontoons or barges.

He says "You need a strong machine to work in a six knot tide. It pulls hard on booms and slew rings."

But despite the arduous nature of some of WM Plant Hire's working environments, fleet replacement is a gradual process over five years, in which time machines could have clocked up around 10.000 hours.

While long-reach excavators do offer good highreach capabilities in addition to reach and depth, Mr McGettrick has stayed away from the demolition scene.

Ours is not a high-reach fleet, though they will lift and place to considerable heights, he says. "But we now spec machinery with far more diverse applications in mind and that specification can include hydraulic undercarriages, telescopic dipper arms, GPS guidance for underwater excavation, dipper extensions, slew restrictors and associated attachments.

It's a constantly changing marketplace for us and our clients, and the challenge for the future lies in being able to meet those requirements.

WM PLANT Hire has had several machines on site at the A500 Stoke Pathfinder project since September 2004, which is being carried out by main contractor Nuttall.

Part of the project involves the temporary diversion of the River Trent and Fowlea Brook watercourses to allow the construction of a new junction over-bridge at City Road.

For this. one of WM Plant Hire's long-reach Cat 330B excavators was required to carry out deep excavation to

allow the river to be temporarily diverted, some 8 m

below. This will allow the existing River Trent culvert to be modified to enable the under ass to constructed.

Fowlea Brook will join the river at this point and the River Trent will thereafter run in open channel, parallel to the underpass carriageways, before eventually entering the Cornwallis Street area through a new culvert.

Similar work is taking place at the Stoke Road junction, where the Trent and Mersey Canal will be realigned back onto their original 19th century alignment, which is presently beneath the roundabout.

Pedestrians will be able to walk from Stoke Road to Liverpool Street over new structures that will incorporate planting and high-quality finishes, and the existing subway network will become redundant.